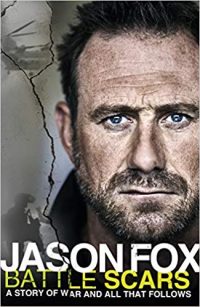 This the biography of Jason Fox, perhaps best known to many of us as one of four instructors from reality/challenge TV series 'Who Dares Wins'. In 'Battle Scars', he describes action-packed episodes from his time during special forces operations in war-torn countries. However, this is only one side of the story: Jason's own private war with the symptoms of PTSD, battling depression, self-doubt, a loss of purpose for even life itself, and desperately searching for answers to end the darkness, a way out, a new life - it all makes for a grim yet very informative and recommendable read for those likewise struggling with mental health issues or to stir up awareness amongst those who do not and dispel the stigma often attached. The writing is itself so immersive and easy to digest, often pulling at heartstrings of readers with even an ounce of empathy. Rest assured, throughout the narrative Jason includes a little tongue-in-cheek humour and respectable worldly attitude to help relieve the pressure of what would normally be a difficult subject to read about. A book worthy of the Club and written by one of the UK's famous special forces veterans - by whose admission that anyone can suffer with mental health problems but, more importantly, with the correct tailored therapy and some commitment that there is light at the end of the tunnel. A great read that hopefully should one day be on bookshelves everywhere.