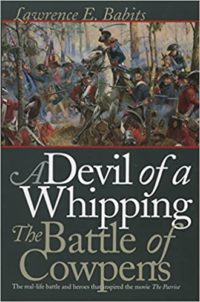 The real-life battle and heroes that inspired The Patriot On January 17, 1781, in a pasture near present-day Spartanburg, South Carolina, Daniel Morgan's army of Continental troops and militia routed an elite British force under the command of the notorious Banastre Tarleton. Using documentary and archaeological evidence to reconstruct the fighting at Cowpens, now a national battlefield, Lawrence Babits provides a riveting, minute-by-minute account of the clash that turned the tide of the Revolutionary War in the South and helped lead to the final defeat of the British at Yorktown.