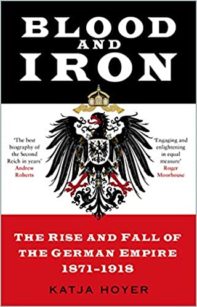 Katja Hoyer’s well-researched and well-written book is the best biography of the German Empire in years. She cogently argues that what started in Versailles’ Hall of Mirrors need not have ended in the disaster of the Great War, and rightly rescues Bismarck from the ignominy of being a forerunner of Hitler. It will undoubtedly become the essential account of this vitally important part of European history -- Andrew Roberts, author Churchill: Walking with Destiny

We ought all to know more about the rise of the Second German Reich, founded with blood and iron in Otto von Bismarck’s words, because the great catastrophes of the 20th century flow from it. In entertaining prose, Katja Hoyer makes that history highly accessible, and paints lively portraits of the political genius, Bismarck, and the naive egotist, Kaiser Wilhelm II -- Michael Portillo, author of Portillo's Hidden History of Britain

Katja Hoyer has written an excellent book on the rise and fall of the German Empire from 1871 to 1918 that is packed with detail and illuminating insights. She shows very effectively the changes in German foreign policy after Bismarck’s fall from power, and the more provocative stance of Kaiser Wilhelm’s world policy that contributed to the outbreak of the First World War, and brought out Germany’s expansionist aims during the conflict. Overall, this book fills a gap in our understanding of the Second Reich, and it helps us to understand more clearly the reasons for its failure -- Professor Frank McDonough, author of The Hitler Years

Engaging and enlightening in equal measure, Blood and Iron is a brilliant synthesis of a complex history which will be welcomed by students and general readers alike -- Roger Moorhouse, author of First to Fight