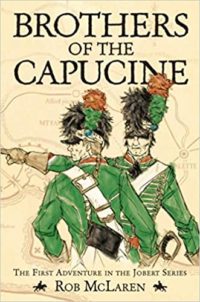 France, 1793.  Four years after the Revolution, France remains in anarchy.

Captain Andre Jobert is a veteran cavalry officer in the French army who joins a newly raised regiment, the 24th Chasseurs a Cheval (mounted hunters).  As an ex-sergeant, Jobert is a tough, battle-smart combat leader with a penchant for cunning deception and always seeking the opportunity to make a little extra cash.  Ably supported by the snarling Sergeant Major Koschak, Jobert cuts, parries and shoots his way through any obstacles that would stop his young chasseurs from achieving their mission.

Brothers of the Capucine is the first of many adventures Jobert and his chasseurs will face as the Revolutionary and Napoleonic Wars continue over the next twenty years.  In this adventure, the reader joins Jobert's company as he races against time to form fresh recruits and green remounts into a fearsome mounted legion.

Will Jobert's inexperienced company of horse soldiers be ready to do their duty at the pivotal siege of Toulon?

'Being firmly in historical realism, the book goes into the gritty details of being in a light cavalry regiment...The book does not shy away from depicting the crudeness and cruelty of this period...fits the times of the Terror.'