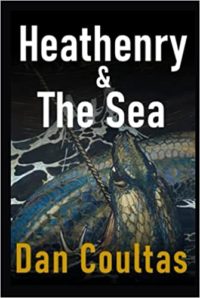 Since the revival of Heathenry in the second half of the 20th century, much has been written about how the spiritual beliefs held by the people of Northern Europe in the early medieval period can be applied to our lives today. You will find books that explain the practicalities of modern Heathen ritual practices and how they compare to those conducted by our ancestors, books on the many deities and spirits and how they are still relevant today, and still more on how texts like the Hávamál can be applied to modern-day life.

One area that has not been explored in as much detail up to this point is the relationship between Heathenry and the sea. This seems to be a glaring omission given how important the sea was to our Heathen ancestors. For many of our Scandinavian ancestors seafaring was a way of life. The sea was also important to others such as the Angles, Saxons and Jutes who took to the waves for a new life in the British Isles, and the Frisians who had an intimate relationship with the sea thrust upon them thanks to the low-lying lands they inhabited.

This book explores many aspects of our relationship with water as humans and as Heathens. Drawing on sources from a wide range of disciplines, Heathenry & The Sea examines how water featured in the spiritual world view of our ancestors from the earliest humans, through the Heathen period and in to the Christianisation of Europe, whilst also bringing the discussion right up to date with the experiences of modern Heathens, as well as some of the scientific explanations for these intrinsic connections with water.

Thanks go to Mr Bernard Cornwell for answering some obscure research questions about what virgins get up to in bilges!