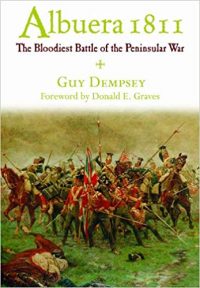 On 16 May 1811, the small town of Albuera was the setting for one of the Peninsular War’s most bloody and desperate battles. A combined Spanish, British and Portuguese force of more than 30,000 men, under the command of Lord Beresford, stubbornly blocked the march of the French field marshal Soult, who was trying to reach the fortress of Badajoz, 12 miles north.

Beresford, who defended himself with his bare hands against a Polish lancer, was victorious, but at the cost of 6,000 Allied deaths and 7,000 French in just four hours. The battle is best known for the Fusilier Brigade’s charge, made famous by Sir William Napier’s melodramatic description, and because of the tenacity of the 57th Foot that earned them the ‘Die Hards’ nickname.

The battle has not been seriously studied since Sir Charles Oman and Sir John Fortescue’s histories early in the 20th century – accounts which are incomplete and sometimes simply incorrect. This compelling new book fills this gap by using authentic primary sources to tell the story of the battle as completely as possible and dispels long-standing myths.

The book also brings to life the human dimension of the story by using first-person recollections to describe experiences on and off the battlefield. The battle’s drama is intensified by the circumstances of the fighting, which led to extremes of behavior ranging from incomprehensible valor to rank cowardice. The book balances the traditional Anglocentric bias by paying equal attention to Spanish, Portuguese, French, Polish and German soldiers who fought there.