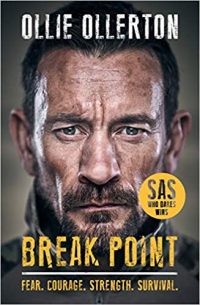 My eleventh read for this year's bookwormathon is another SAS: Who Dares Wins presenter biography. 'Point Break' tells the story of how Ollie Ollerton shrugged off his actions of being a young offender and endeavoured to realize an ambition of joining the army. Although this seemed like a complete turnaround, however, only in recent years has he finally settled into a way of life that satisfies his personal goals - one of which is to help others in their struggle with physical and mental barriers. But his positive outlook and gratitude for 'silver linings' (as he often quotes!), an ever restless non-conformist with unbounded energy, has pushed him from one type of job to another, from one situation to another. But one lesson here is that Special Forces soldiers, while highly trained and truly exceptional in their skills, are also as human as the person in civvy street, subject to emotional turmoil, boredom and self-doubts, prone to making mistakes just like the rest of us. Ollie's witty, breath-taking, and at times humbling biography is an excellent example from which to draw inspiration. It's never a sin to learn from the mistakes of others, nor is it ever wrong to applaud their achievements - a sentiment to which I'm certain Ollie would agree. A book very hard to put down....in both the physical and metaphorical sense!