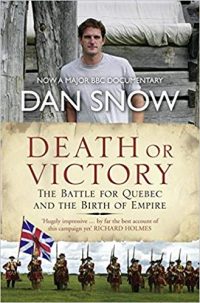 Historians - both professional and hobbyist - certainly know about the Capture of Quebec by daring General James Wolfe in 1759. However, in truth this was only part of a hard and brutal campaign of attrition - and British victory was by no means certain. The Seven Years War has often been seen as a 'world war' between the European superpowers of the day; the New French empire in North America was one such theatre of this conflict, a vast far-flung territory yet whose fate would have far-reaching economic and political advantages for whichever side that won. Although there were other armies and objectives active within Canadian territories at the time, the capital of Quebec was seen as the real prize. Author Dan Snow is best known as the TV co-presenter of 'Battlefield Britain' (alongside his father Peter Snow). 'Death or Victory' is a study complied from diaries and journals from various contemporaries present during such a difficult campaign; he has had to sift facts from exaggeration, conjecture, and even weigh up personal accounts based on political bias. Some acts and motives still remain a mystery and he states this while coming up with possible reasons. The arduous Quebec Campaign marked a steep learning curve for the British army that was often pushed to its very limit. Many valuable lessons were learned in the evolutionary face of warfare: the importance of a naval and army co-ordination along the treacherous Saint Lawrence, how light infantrymen played an integral part against the brutal savagery of Native American Indians during skirmishes in the forested regions, and even Wolfe's own policy on hygiene and the prevention of disease throughout his encampments. As Dan Snow explains with dramatic flair suited to a decisive war, the French garrison army under Montcalm - consisting of disciplined regulars, Canadian sharpshooters and militia, fierce Native tribesmen - in fact proved most stoic and loyal to preserving King Louis' hold over Quebec, frustrating several attempts at a British landing and assailing the Royal Navy whenever they could. Mistakes and miscalculations were made, opportunities found and missed, acts of gallantry and atrocities committed, the exhaustion and exhilaration, the feints and battles, and luck as always played its part in a campaign that, for both sides, certainly became a stark choice between 'death or victory'.