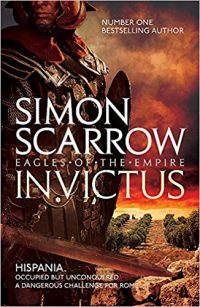 My tenth read for 2019 - and ashamedly my first taste of Scarrow's superb style - is 'Invictus'. It follows protagonists Macro and Cato as they are given command of a Praetorian Cohort with one vital mission: to help crush a massive rebellion in Hispania led by renegade Iskerbeles. But, as nearly always, the best laid plans are not so straightforward and seldom go accordingly. Continuously defying the odds, Macro and Cato endeavour to thwart both rebel and imperial ambition, while victory is by no means certain.... This is a breath-taking adventure with such page-turning descriptive of bloody battles in the same vein as Bernard Cornwell's stories. The various characters are themselves very intriguing and memorable, each with a background and their own integral part to play. Along the way, Simon Scarrow also gives an insight into how the Roman Army often behaved, performed and functioned - a true historical novel of epic proportions!