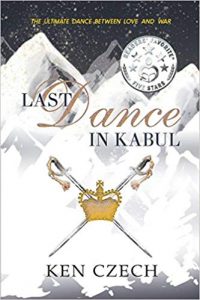 In Kabul, the British Army of 1841, led by incompetent commanders and greedy bureaucrats, is oblivious to the gathering of hostile tribes in the high peaks of Afghanistan’s Hindu Kush. One man, former Captain Reeve Waterton, risks his life to warn of the impending danger only to be beaten and put in chains for his efforts.

Waterton, commander of the 37th Native Infantry, an Indian “sepoy” regiment, is driven from the army by the bigoted Brigadier John Shelton and his intolerable toady, Captain Llewelyn Rigby. Months later, at a dock in Bombay, he confronts the haughty, cold, striking Sarah Kane, niece of Brigadier Shelton and fiancée of Captain Rigby.

The two immediately dislike each other and their mutual disdain grows with additional encounters. But they cannot forget one another as both journey toward Kabul, she to wed, he as a contract surveyor. When Sarah's caravan is ambushed by warlike tribesmen, Waterton rescues her and, thrust together in hardship, their animosity turns to affection.

Reeve Waterton delivers her safely to her uncle and her betrothed in the confines of the British cantonment in Kabul. They, in turn, throw him out of the stronghold. A master of languages, Waterton disguises himself as Rashdallah, teller of tales, and discovers tribes throughout Afghanistan are gathering to attack the British in their enclave. His warnings fall on deaf ears. Captain Rigby, leading a doomed foray against the tribesmen, is gravely wounded and left for dead. Waterton rescues his nemesis, who repays him with betrayal and imprisonment to keep him from Sarah Kane, whom they both love.

The indecisive British commanders, recognize their plight too late and negotiate “safe” passage. Like starving wolves, the vengeful natives descend on the freezing British army and their camp followers as they struggle through the mountains during the worst of the winter snows.

Last Dance In Kabul by Ken Czech is a rousing romp of high adventure, a tale of love, hate, courage, betrayal, loyalty, stubborn incompetence and heroic sacrifice set during the heartrending tragedy of the British withdrawal from Kabul in the bitter winter of 1841-2.

Reeve Waterton, a dashing rogue, is a true hero who stands among the most valiant officers of British fiction. Sarah Kane is an assertive woman assured of her own mind yet vulnerable in her heart. Together they spark the blaze that energizes Last Dance In Kabul.