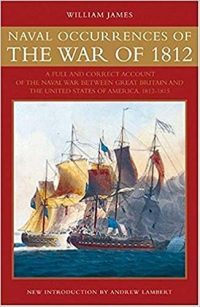 William James was the greatest historian of the 1812 war between the United Kingdom and the United States. A combination of timing and sheer genius placed this man, blessed with astonishing acuity, in the US just at the time when Madison's administration lived up to the "Mad" part of "Madison" and declared war on Great Britain. As Rory Muir, among others, has demonstrated, the American case against Britain, the pretext for declaring war, was wildly hypocritical; the US claimed that Royal Naval practices justified war, but never threatened war against France, whose navy followed identical procedures. The truth was that France was about (as Madison imagined) to conquer Russia, while Britain was bogged down in Spain (but actually just about to win a spectacular victory at Salamanca).

The US took advantage of Britain's Iberian pre-occupation, to invade Canada. The invasion was a catastrophe, because the US army really was hopelessly bad in 1812 (ironically, pictures from the time show that the soldiers wore uniforms made in England). That left the naval war for Madison to justify his disastrous foreign policy choices. A few USN ships defeated smaller RN ships and the Yankee press went to town on those cases, but William James, a barrister, turned his forensic brain to them. He demonstrated that no British ship ever surrendered to a US ship of equal or lesser power (referring to the weight of a broadside and the ability of a ship to withstand a broadside), whereas USN ships, on several occasions, surrendered to smaller RN frigates.

This is a magnificent book, because James was so meticulous. He was trapped in the United States for the whole duration of the War of 1812, which lasted until 1815. He was treated extremely well by his American captors; they let him into their dockyards and discussed the better points of their warships. James read every scrap of information about naval matters, but also read everything that the authors had written previously. Gloriously, when an American author praises the USS Constitution for defeating two much smaller British ships, James is able to demonstrate an article in which the same US commentator had rightly put forth the view that a major warship would always triumph over any number of minor warships. James describes every naval engagement from the war, giving the numbers of personnel and the weight of shot involved on both sides. He shows that that the RN never lost to equal, or inferior, forces, whereas the USN repeatedly did (which would be roughly the opposite of what anyone gets taught in school in America).

The American re-writing of 1812 is still happening today. It's the "Second War of Independence". The fact that Britain was never trying to re-conquer the US seems to make no difference. Books published in the US in recent decades have shamelessly regurgitated dishonest claims from the likes of Stephen Decatur, without taking the trouble to read "Naval Occurrences". This book was actually banned from the US Naval library in Annapolis for the whole of the nineteenth century. Andrew Lambert's "The Challenge" has finally produced a rival to this masterpiece from William James. Lambert's book is outstanding, but I'd recommend that anyone with an interest in this particularly stupid war reads the work of William James.

*William James latterly also wrote a history of the Royal Navy. He didn't repeat much of what he had already written about the 1812 war, so this book really is the one that matters, for this conflict.