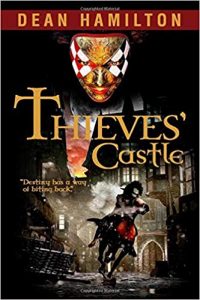 Kit Tyburn, ex-soldier turned play-actor and part-time intelligencer for the Queen’s spymaster Francis Walsingham, is back in London and adrift. Penniless, cut loose from both his playing troupe and his mercurial employer, Tyburn is hired to track down a missing gold-seller who has vanished, along with the monies needed for the completion of London’s first permanent theatre.

But London’s dark and fetid back-alleys hide deadly secrets, as Tyburn uncovers a more treacherous game – a war between two noble houses that pulls him into a murderous conflict on the streets, a deadly Spanish conspiracy and a twisted thief-lord chasing her vengeance.