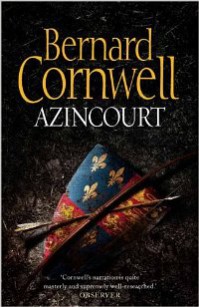 Agincourt (Azincourt in French) is one of the most famous battles ever fought; the victory of a small, despised, sick and hungry army over an enemy that massively outnumbered it. Azincourt, the novel coming soon, tells the story of that small army; how it embarked from England confident of victory, but was beaten down and horribly weakened by the stubborn French defence of Harfleur.

By the end of that siege common-sense dictated that the army sail for home, but Henry V was stubbornly convinced that God was on his side and insisted on marching from Harfleur to Calais to prove that he could defy the great French army that was gathering to crush him. He believed he could evade that army, but the march, like the siege, went disastrously wrong and the English were trapped and so forced to fight against an enemy that outnumbered them six to one.

Azincourt is the tale of Nicholas Hook, an archer, who begins the novel by joining the garrison of Soissons, a city whose patron saints were Crispin and Crispinian.

What happened at Soissons shocked all Christendom, but in the following year, on the feast day of Crispin and Crispinian, Hook finds himself in that small army trapped at Azincourt. The novel is the story of the archers who helped win a battle that has entered legend, but in truth is a tale, as Sir John Keegan says, ‘of slaughter-yard behaviour and outright atrocity’.

Readers wanting to explore the background to the battle of Agincourt will find Juliet Barker’s website useful: www.julietbarker.co.uk.