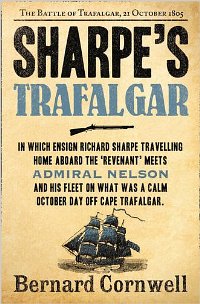 Sharpe has to go home from India, and he would have left in 1805 and Cape Trafalgar lies on his way home, so why should he not be there at the right time? The greatest difficulty in writing this book was engineering the plot so that Sharpe could be on board a fighting ship of the Royal Navy (he would have sailed home in an East Indiaman, a merchant ship), but once that was solved Sharpe could give a capable hand in this, the greatest of all sea battles fought under sail.