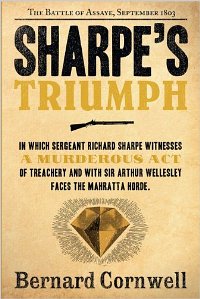 Sharpe, now a Sergeant, finds himself alongside Sir Arthur Wellesley at the terrifying Battle of Assaye. In later life Sir Arthur (who became, of course, the first Duke of Wellington), always reckoned Assaye was his finest achievement. During the battle he very nearly died, or certainly had his closest escape in a fight, and Sharpe, naturally, is there. The ‘villain’ in this book (apart from Hakeswill) is Anthony Pohlmann, a cheerful Hanoverian rogue who began life as a mercenary ranker and became one of India’s most successful generals.