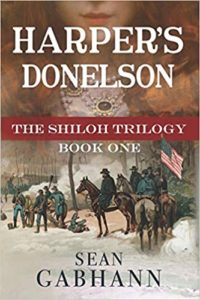 A Union sharpshooter must deal with a prostitute, a distrustful Quaker, and a ruthless Confederate captain in the second edition of Gabhann’s 2015 Civil War novel, the first book in a trilogy.

Kentucky, 1862. Lt. James Harper, a crack shot and veteran of the Mexican War, proudly serves with 1st Iowa Mounted Infantry. However, instead of climbing the ranks, he wallows as the battalion adjutant, “a desk job more suited to an accountant than to a man who had spent eight years as a United States marshal in the territories beyond the Missouri River.”

Even a moment of bravery in which he saves the life of Gen. Ulysses S. Grant is tainted by the behavior of his men, who disobeyed Harper’s order to leave the wounded son of a Union colonel behind. His battalion is now stationed near the city of Paducah, where Harper shares the bed of 15-year-old prostitute Katie Malloy. Her life as a saloon girl began after her alcoholic father cruelly sold her to the brothel owner. Katie will have to learn quickly if she’s to survive the war, a feat that may be harder for her than for the soldiers she beds. For Harper, opportunity comes in the form of a chance to train 40 men as sharpshooters before leading them into battle. The only problem is that the men don’t like or trust Harper, including the giant Quaker farm boy Corp. Gustav Magnusson. When Harper and his men are captured by the Confederates, they find themselves under the sadistic command of Capt. Anderson Bell, who does not feel any obligation to keep the Yankee prisoners alive. In this installment of the series that continues with Harper’s Rescue (2017),

Gabhann re-creates the events surrounding the Union victory in the Battle of Fort Donelson in stark imagery: “Night brought quiet from the gunfire, a quiet broken only by the moans of injured men left behind on the battlefield. A full moon illuminated the valley and backwater where the Rebel cavalry had retreated earlier. Dark lines in the snow revealed the locations of roads and streams.” The sections about Katie sit oddly against those of Harper and Magnusson, and they veer at times into exploitative territory. As far as communicating the myriad motivations of soldiers and the brutality of warfare—both on the battlefield and off—the book presents a darkly intriguing look at this perilous moment in the Western theater.