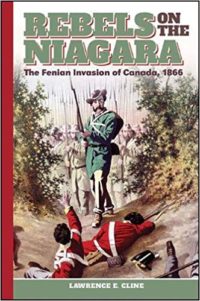 In what is now largely considered a footnote in history, Americans invaded Canada along the Niagara Frontier in 1866. The group behind the invasion—the Fenian Brotherhood—was formed in 1858 by Irish nationalists in New York City in order to fight for Irish independence from Britain. At the end of the American Civil War, Fenian leaders attempted to use Irish Americans, many of them combat veterans, to seize Canada and make it the “New Ireland” as a means to force the British from “old” Ireland. New York State was both the epicenter of Fenian leadership and a key support base and staging area for the military operations. Although relatively short-lived and with some of its military operations being somewhere between farce and tragedy, the Fenian Brotherhood had a very important impact on nineteenth-century New York and America, but remains largely forgotten. In Rebels on the Niagara Lawrence E. Cline examines not only the Fenian operations and their impact on Canada, but also the role the United States and New York played in both the initial support for the Fenian movement and its subsequent collapse in America