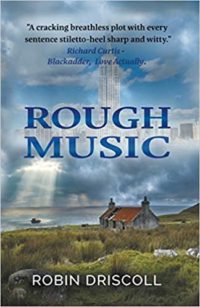 Robin Driscoll co-wrote all the Mr Bean TV episodes and the two film scripts. This was his first of a series of thrillers. I love them!

A lawyer running from the Russian mob. A jilted lover hard on his heels and a hitman who has them both in his sights. All three are on a collision course to a remote Scottish Island, and not all of them will be making it home. John Grisham's The Firm meets The Thomas Crown Affair and bumps into Whiskey Galore! on the way.