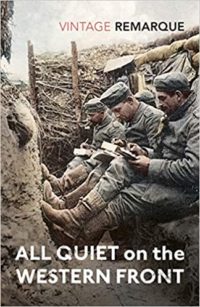 I've never read books on how brutal and dehumanizing war is. I've picked up this books because I was in boot camp, and my platoon had to review a book in order to develop our skills to deliver a speech in public. I chose ''We'' by Yevgeny Zamyatin, a book that influenced each and every dystopian book in the twentieth century - ''1984'', ''Animal Farm'', ''Brave New World'', ''Fahrenheit 451''. I didn't like the book at all, notwithstanding reading and loving every book aforementioned. A colleague of mine chose ''All Quiet on the Western Front'', and reviewed the book amazingly, and I was really curious about the book. So I bought it and read it, and it's really a poignant tale about how war can break the men who are in it. When the tales of how boys are sent into war to fight a war they know nothing about are told, we feel as though there's something really stupid and cruel about ourselves to make this kind of choice. Young people who had just gotten out of school were, all of the sudden, shooting enemies whose ''crimes'' they didn't know anything about. The only thing that keeps these boys alive is the hope to get back hope to a life they once knew, but now looks so distant and always like a dream. It teaches to value our lives and to have to push through what they have. Our family, our friends, our fields - everything we take for granted - take a new shape after this reading, we learn not to take all of those thing at face value, they are more  than we'll ever know. Even having a pair of shoes, or boots, has its value. This books reminded me a lot of ''Paths of Glory'', a Stanley Kubrick's movie about the First World War, which is, also, the War fought in this book. Specially the ending of the film reminded me of this book: the american soldiers at a tavern in an occupied city in Europe crying whilst watching a performance of a german girl. This book has a horrendous story, but one which cannot be overlooked or ignored - war isn't a glorious thing to desire, it isn't like the Hollywood movies where one man can win a war unscathed - physically and mentally. I learnt a lot from this book, and I hope whoever reads this review - if anyone reads it - picks up this book and reads it.