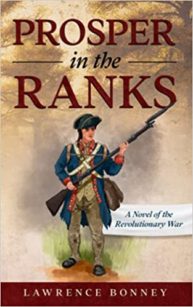 A vagabond arrested for bounty-jumping, William Prosper only joined the Continental Army to avoid the noose. Neither a patriot, nor a hero, there is little to keep him from deserting, and it is only a matter of time before the opportunity presents itself. Meanwhile he must survive hunger and exhaustion, as well as the abuse of hated officers, before he can even think about facing the enemy.

A departure from the myth of the citizen-soldier and "embattled farmer," Prosper in the Ranks is a story of action and adventure. Far from the powdered wigs of Liberty Hall, this is the American War of Independence from the point of view of its most conveniently forgotten protagonists: the reviled ruffians of the Continental Army. Follow Prosper and his comrades in the Delaware Regiment through the campaign of 1777 on a journey that will find its culmination along the bloody banks of Brandywine Creek.

. My first novel, which I wrote in Google Doc on my android phone while sitting on the L train. It took me a year and a half to write and almost as much time to edit (with the help of a very kind friend). It was really a labor of love for me. I started writing it just to escape my daily life, but I soon became determined to see it through to the end.

I was always interested in the American Revolution, but for different reasons than most people I knew who were interested in it. So I wanted to write a book set during the war that was essentially an adventure story and leave out all of the self-righteous mythology that normally goes along with it. This novel tells the story of an idle young man who gets caught up in a civil war and winds up discovering something about himself because of it.

It’s not perfect, but it's my first book. The British soldiers, in hindsight, were portrayed somewhat cartoonishly. My apologies in advance. In spite of its imperfections, I hope that maybe a few people will experience as much enjoyment reading it as I did while writing it. A sequel will be forthcoming.