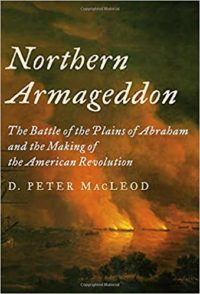 The battle on the Plains of Abraham lasted twenty minutes, and at its finish the course of a continent was changed forever: New military tactics were used for the first time against standard European formations; Generals Wolfe and Montcalm each died of gunshot wounds; France surrendered Quebec to the British, setting the course for the future of Canada; and British control of North America east of the Mississippi was assured. Also American participation in ousting the French spurred the confidence of the people of New York, Pennsylvania, and Massachusetts, who began to agitate for independence from Great Britain.

In Northern Armageddon, Peter MacLeod, uses original research--diaries, journals, letters, and first hand accounts--and all of his extensive knowledge and grasp of warfare and colonial North American history, to tell this epic story on a human scale. A huge, ambitious re-creation, MacLeod gives us the large-scale ramifications of this clash of armies, not only on the shape of North America, but on the history of Europe itself