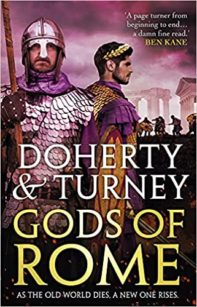 For one to rule, the other must die.

312 AD is a year of horrific and brutal warfare. Constantine's northern army is a small force, plagued by religious rivalries, but seemingly unstoppable as they invade Maxentius' Italian heartlands. These relentless clashes, incidents of treachery and twists of fortune see Maxentius' armies driven back to Rome.

Constantine has his prize in sight, yet his army is diminished and on the verge of revolt. Maxentius meanwhile works to calm a restive and dissenting Roman populace. When the two forces clash in the Battle of the Milvian Bridge, there are factors at work beyond their control and soon they are left with carnage.

There is only one way Constantine and Maxentius' rivalry will end. With one on a bloodied sword and the other the sole ruler of Rome...