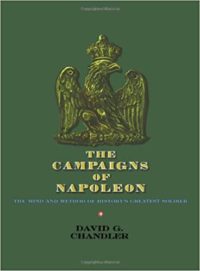 For anyone with even the barest interest in the Napoleonic Wars this book is a must have. The Campaigns of Napoleon is a masterful analysis and insightful critique of Napoleon's art of war as he himself developed and perfected it in the major military campaigns of his career. Napoleon disavowed any suggestion that he worked from formula (“Je n'ai jamais eu un plan d'opérations”), but military historian David Chandler demonstrates this was at best only a half-truth. To be sure, every operation Napoleon conducted contained unique improvisatory features. But there were from the first to the last certain basic principles of strategic manoeuvre and battlefield planning that he almost invariably put into practice. To clarify these underlying methods, as well as the style of Napoleon's fabulous intellect, Chandler examines in detail each campaign mounted and personally conducted by Napoleon, analysing the strategies employed, revealing wherever possible the probable sources of his subject's military ideas.