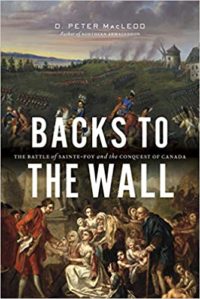 In the spring of 1760, after having suffered a brutal winter, Quebec garrison commander James Murray's troops were vulnerable and reduced to an army of skeletal invalids due to malnutrition and scurvy. Trapped in hostile territory and lacking confidence in the fortifications of Quebec, Murray planned to confront French attackers outside the walls. Instead of waiting at Montreal for the British to attack, Montcalm's successor, François-Gaston de Lévis, returned to the plains for a rematch accompanied by every combatant available--French regulars, Canadian militia and First Peoples warriors. The ensuing Battle of Sainte-Foy was less a battle for territory than a struggle for survival between two equally desperate adversaries. If the British lost the battle, they would lose Quebec. If the French lost the battle, they would very likely lose Canada--both the French and the British had their backs to the wall.