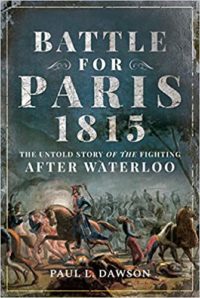 Seldom studied in French histories and virtually ignored by English writers, the French Army fought on after Waterloo. Many commanders sought to reverse that defeat—at Versailles, Sevres, Rocquencourt, and La Souffel, the last great battle and the last French victory of the Napoleonic Wars.

Marshal Grouchy, much maligned, fought his army back to Paris by 29 June, with the Prussians hard on his heels. On 1 July, Vandamme, Exelmans and Marshal Davout began the defense of Paris. Davout took to the field in the north-eastern suburbs of Paris along with regiments of the Imperial Guard and battalions of National Guards.

For the first time ever, using the wealth of material held in the French Army archives in Paris, along with eyewitness testimonies from those who were there, Paul Dawson brings alive the bitter and desperate fighting in defense of the French capital. The 100 Days Campaign did not end at Waterloo, it ended under the walls of Paris fifteen days later.