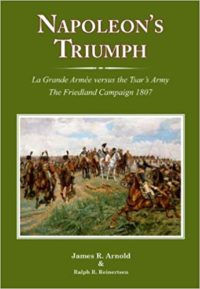 February 1807 found one of history’s foremost military geniuses, Napoleon Bonaparte, retreating with his battered army from the bloody, inconclusive Battle of Eylau. A mere four months later, Napoleon gained a decisive triumph at the Battle of Friedland. Thereafter, in a stunning display of power, he rearranged the map of Europe. The sequel to October Triumph: Napoleon's Invasion of Germany, 1806 and Crisis in the Snows: The Eylau Campaign 1806-1807, Napoleon’s Triumph: The Friedland Campaign 1807 describes Napoleon’s amazing reversal of fortune and provides an original interpretation of the 1807 campaign. Lavishly illustrated with portraits, drawings, paintings, and maps, and supplemented with detailed appendices on the strengths and composition of the rival forces.