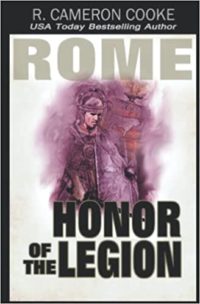 The armies of Caesar and Pompey have played cat and mouse along the coast of Greece for months. Through endless marches and countermarches, both sides have avoided the great battle that must inevitably come.

But time is running out for Caesar. Outnumbered and cut off from Italy, his army weakens with each passing day, while Pompey’s only grows stronger.

To bring his enemy to battle, Caesar has done the unthinkable. He has trapped Pompey's superior force against the sea and now lays siege to the massive army. Encircled and facing desperate water shortages, Pompey must act soon. He must attack.

As the great battle looms, Centurion Lucius Domitius of Caesar’s Tenth Legion is dispatched on a secret mission. From the start, the undertaking is imperiled by treachery and deathtraps. Old enemies emerge, as do unexpected allies – and the chance to punish a murderer who has evaded Lucius’s avenging sword for far too long.

Tormented souls cry out from the underworld. They demand revenge. And Lucius vows to put them to rest, once and for all…