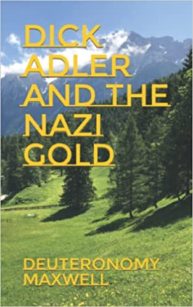 August 1945. The war is over. But somebody is still killing German soldiers.

When the mutilated corpse of Ludwig Mises, a mountain infantryman turned racketeer, comes tumbling down a waterfall near the idyllic Bavarian village of Mittenwald, the case is brought to the attention of General George S. Patton. Patton suspects the murder is linked to the notorious Nazi gold; a horde of Reichsbank bullion and currency reserves worth billions of dollars, dispatched by Hitler to his would-be Alpine Fortress, during the desperate twilight days of the Third Reich.

After a disciplinary incident involving a hot-headed Prussian countess, legendary OSS commando Major Dick Adler is reassigned to help Military Police with the Mises case. The chief investigator, Averill Crudup, is convinced the victim’s wife is guilty. But when another dead Nazi turns up in a lake sporting similar mutilations, Adler suspects both murders are the work of a single killer.

Following his hunch all the way up a nearby mountain, Adler arrives at the Schloss Gifu, a gothic castle converted into a luxury hotel, where he stumbles across a conspiracy that goes far deeper than a couple of dead soldiers. Indeed, this monstrous scheme could pose an even greater threat to Europe and the world than the recently vanquished Third Reich…

Adler will be pushed to breaking point by a reclusive and bizarre criminal genius, a striking Russo-Japanese seductress, a polyglot East African strongman with a penchant for lederhosen, a menagerie of deadly 'pets', including a white tiger called Daisy, and a mysterious secret society hell-bent on power, at any cost...