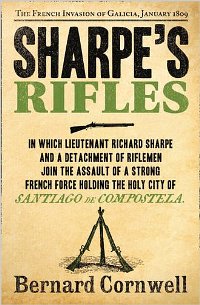 The beginning of the Peninsular War (the battles between 1808 and 1814 to expel the French from Portugal and Spain). The Peninsular Campaign occupies most of the Sharpe series and this book begins during the infamous retreat to Corunna, but ends in a purely fictional battle. The book was written at the request of the producers of the TV series who wanted a Spanish hero to share the honours with Sharpe. This is the first of the TV programmes – and all the books that follow, except Sharpe’s Devil, are available on video or DVD. BE WARNED!! US Videos won’t work on British machines and vice-versa, so make sure you’re buying the right format!