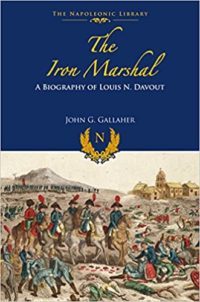 This book is the long awaited reprint of John Gallaher's 1976 classic account of one of Napoleon's greatest Marshals, Louis Davout, 'The Iron Marshal'. According to David Chandler, Davout was "one of the least liked as a man, the ablest as a commander, and the most feared - and respected - as an adversary. He was also, from 1798, one of the loyalist of Napoleon's key subordinates."

This is an excellent biography of a Napoleonic commander. The book covers Davout's military career from when he entered the Ecole royale militaire in 1779, through the Revolution, the Napoleonic Wars and finally his death in 1823. The narrative flowed along faultlessly although I would have liked more detail in regards to Davout's battles. However the author has covered these battles well enough and provided eight maps to assist the reader in following the action. Davout fought in numerous campaigns from Egypt to Russia and was successful always, his most famous battle being at Auerstadt.

Mr Gallaher has also supplied the reader with some insight into Davout the man with details of his relationship with his devoted wife and the tragedies of his children. You leave this book with a feeling that Davout was a man who did his all for duty (France and the Emperor) but never forgot his family. I loved reading this book and I felt it was not long enough (420 pages). I fretted about finishing, I wanted more, I did not want to put the book down nor finish it!

I would recommend this book to anyone who loves reading about the napoleonic period or anybody who enjoys a decent military biography. This is a great book about a great commander.