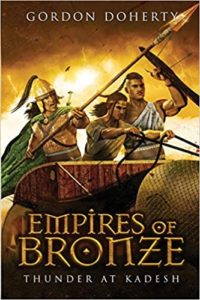 It will be the cruellest war ever waged, and the Gods will gather to watch…

1275 BC: Tensions between the Hittite and Egyptian Empires erupt and the two great superpowers mobilise for all-out war. Horns blare across the Hittite northlands and the dunes of Egypt rumble with the din of drums as each gathers an army of unprecedented size. Both set their eyes upon the border between their domains, and the first and most important target: a desert city whose name will toll through history. Kadesh!

Prince Hattu has lived in torment for years, plagued by the memory of his wife’s murder. Thoughts of her poisoner, Volca the Sherden – for so long safe and distant by Pharaoh Ramesses’ side – have sullied his dreams, blackened his waking hours and driven him to commit the darkest of deeds. Now that war is here, he at last has the chance to confront his nemesis and have his vengeance.

But as the ancient world goes to war, Hattu will learn that the cold, sweet kiss of revenge comes at a terrible price.