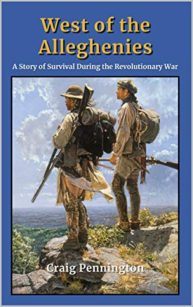 (The review submitted by the book's author)

War Drums echo across the Frontier

Driven by the promise of a new frontier, Fergus Moorhead, his beautiful young wife, Jane, and a small group of intrepid pioneers challenge the treacherous road across the Allegheny Mountains to tame the wilderness of Western Pennsylvania.

Soon, their fragile world is ripped apart by the realities of war. Fergus is captured by Indians and forced on a nightmare journey that takes him from one of the bloodiest battles of the Revolutionary War to the hell of a British prison ship. Not knowing if her husband is dead or alive, Jane and her children must face the dangers and heartbreak of the frontier alone.

Based on a true story, West of the Alleghenies is the epic tale of one man's struggle to survive in a war-torn land and return to the woman he loves.