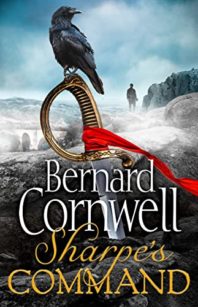 I must apologise to all of you who were looking forward to reading Sharpe’s Command later this year.  The publication of the book has been postponed for a year. The reasons for this were that my last few months have been harried by surgeries, I lost one month because of the Cape Cod Shakespeare Festival, and the whole period was spent in in the deep, dark valley of the shadow of dentists.  The surgeries were successful, the Festival a triumph, and the dentistry is finished – but the book is not. I regret the postponement, but hope you enjoy the story when it finally appears.

Spain, 1812. Richard Sharpe, the most brilliant – but the most wayward – soldier in the British army, finds himself faced with an impossible task.

Two French armies march towards each other. If they meet, the British are lost. And only Sharpe – with just his cunning, his courage and a small band of rogues to rely on – stands in their way . . .