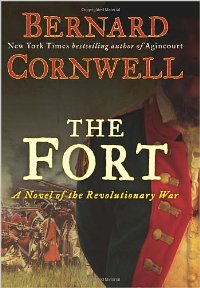 THE FORT is about the Penobscot Expedition of 1779. A small British garrison had been established in what is now Maine (and was then part of Massachusetts), and the rebel government in Boston was determined to expel that garrison.

Seven hundred British redcoats were in an unfinished fort, Fort George, and the harbour beneath the fort was protected by three sloops-of-war. Against this the State of Massachusetts sent an army of around 900 men and a fleet of 42 ships, half of which were warships.

In this early scene a handful of rebel ships feel out the British harbour defences. The Lieutenant John Moore who watches the fight is the famous Sir John Moore, of Corunna fame. This was his first experience of battle, when he was 18 years old.

The Penobscot Expedition is an extraordinary story, one that has fascinated the author for years, and will now fascinate his readers. Summer 1779, a British force of fewer than one thousand Scottish infantry were sent to build a garrison in the State of Maine. The war of Independence was in its third year and no other British troops stood between Canada and New York. The State of Massachusetts was determined to expel the British, but when they sent a fleet of forty vessels to 'captivate, kill and destroy' they underestimated their enemies, calm in battle and ready for victory...

Click here to read an excerpt from The Fort