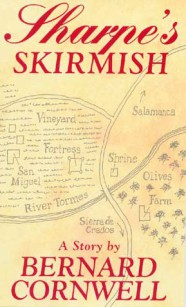 A short story by Bernard Cornwell

It is the summer of 1812 and Richard Sharpe, newly recovered from the wound he received in the fighting at Salamanca, is given an easy duty; to guard a Commissary Officer posted to an obscure Spanish fort where there are some captured French muskets to repair. But unknown to the British, the French are planning a raid and Sharpe is in for a fight!

The short story Sharpe’s Skirmish extensively revised, expanded and rewritten by Bernard Cornwell and published by the Sharpe Appreciation Society.  This book is now out-of-print.