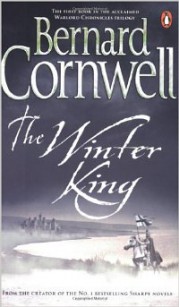 ‘Once upon a time, in a land that was called Britain, these things happened . . . . and I was there, and this is how it was.’ The Winter King , like the rest of the trilogy, is narrated by Derfel (which is pronounced Dervel), one of Arthur’s warriors. This first book tells how after the death of Uther, High King of Britain, the country falls into chaos. Uther’s heir is a child, Mordred, and Arthur, his uncle, is named one of the boy’s guardians. Arthur has to fight other British kingdoms and the dreadful “Sais” – the Saxons – who are invading Britain. Arthur is supposed to marry Ceinwyn, a princess of Powys, but falls disastrously in love with Guinevere – ‘There have been many more beautiful women, and thousands who were better, but since the world was weaned I doubt there have been many so unforgettable as Guinevere . . . and it would have been better, Merlin always said, had she been drowned at birth.’

To read an interview I did with the Camelot Project, click on this link:  http://d.lib.rochester.edu/camelot/text/thompson-interview-cornwell