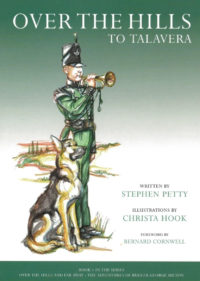 A Rival for Sharpe?

I’m delighted to announce the publication of Over the Hills to Talavera – a book for youngsters that tells the tale of George, an orphan who is raised in a workhouse, but escapes to become a bugler with the 95th Rifles! The book, written by Stephen Petty, is planned to be the first in a series that will take George all the way to Waterloo. I wrote the foreword and I’m delighted to say the book has been endorsed by Camilla, the Duchess of Cornwall and Colonel-in-Chief of the Rifles, and by General Sir Patrick Sanders, the Colonel Commandant of the Rifles, and by Peter Snow, the broadcaster and journalist Its published by Chosen Man Media and is available from the official store of the Rifles Regiment – https://riflesdirect.com/collections/rifles-direct