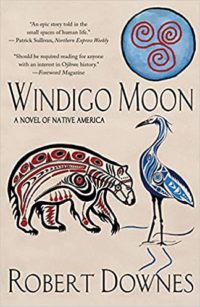 If you enjoy stories of the Indians of North America, you’ll love “Windigo Moon,” which details 31 years in the life of an Ojibwe couple living on the Upper Great Lakes well before the arrival of European explorers.

Beginning with the attack on an obscure Ojibwe village on the shores of Lake Superior in 1588, the young protagonist, Ashagi (Blue Heron) is captured by the Dakota Sioux and condemned to a life of slavery. Stolen away by an Ojibwe brave, she and Misko Makwa (Red Bear) face the upheavals of warring tribes, the onset of the Little Ice Age, and the plague of mysterious diseases introduced by far-off invaders. All that, and an unwanted suitor, the vicious warrior Nika (Lone Goose), whose obsession for Ashagi descends into madness.

“Windigo Moon” offers a deep dive into Native culture, including the supernatural beings, politics, language and warfare of the Ojibwe.  Just released is “The Wolf and The Willow,” a prequel, which takes place 60 years earlier in 1528.