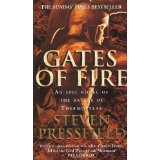 "Gates of Fire" tells the story of the epic stand of Leonidas and his 300 Spartans at Thermopylae. The story is told from the viewpoint of Xeones, a gravely-wounded Spartan squire captured by the Persians. Pressfield has not only created a crackingly good account of the climactic battle at the Hot Gates, but has also managed to weave in much detail about classical Greek culture and the warrior ethos of the Spartans. His attention to historical detail and vivid characters remind me a great deal of another author of historical fiction whom we all know and love! A great book that will entertain, educate, and move you.